Passionate social debate, political lobbying and power contests – working in politics is not just a job; it’s a way of life. It involves a sincere commitment to consistently upholding and promoting a belief system regarding the governance of society and what is best for the population at local and national levels.
There is a certain integrity and honour in verbally fighting for what you believe in. For example, take Simon Carter, Councillor for Harlow Council in Essex. For twenty years Simon had been involved in politics on a part-time basis but after taking early retirement in 2000 Simon decided to dedicate himself to the Harlow wing of the Conservative Party. His role as Political Agent means that he is overly responsible for the content of any campaign information material, be that leaflets or newsletters. His aim is to act on behalf of the Harlow Conservatives and ensure that their message gets across to the community in the constituency.

Between 1956 and 2002 Harlow Council was under the control of the Labour Party in the local elections in May 2008, history rewrote itself. Labour lost the 15 seats they contested and for the first time ever, Harlow Council became Conservative led.

Following this unprecedented result the next goal for the Harlow Conservatives, (apart from supporting the community on an on-going basis and tackling local issues); was for their Parliamentary candidate Robert Halfon to win the Constituency seat and represent Harlow in the House of Commons. The Harlow Constituency seat is the Tory Party’s number three target seat in the country. With a general election just over the horizon and a Labour majority of less than 100, Robert’s chances of becoming an MP are excellent.

DOR-2-DOR started working with the Conservative Party in Harlow at the beginning of 2007. At the time, the Harlow Conservatives were looking for someone to distribute leaflets and newsletters for them and one of the DOR-2-DOR leaflets happened to come through the door at the right time, when local elections were but a season away.

What were you looking to achieve with your leaflet campaign?
“The purpose of our campaign was to raise awareness and get our message heard, understood and supported. We wanted to maintain and build the profile of Robert, our parliamentary candidate.”

What format is the leaflet and who designed and printed it?
“The material varies from leaflets to newspapers. It tends to be A4 size and contains information about specific campaigns on local issues relevant to particular localities.”

What areas did your campaign cover, over what period?
“In the last 18 months DOR-2-DOR has delivered over 300,000 newspapers and leaflets on behalf of the Harlow Conservatives, with the majority being delivered in the months preceding the local elections. The sizes of distribution varied but most incorporated Harlow, Roydon, Sheering and Nazeing, which amounted to about 35,000 households. At other times campaigns were targeted to specific areas. In terms of time scale, in most cases the material was required to be delivered straight away.”

What results did you see?
“Taking control of the Harlow Council from Labour was a significant achievement for the Conservative party and the first in Harlow’s history. Coupled with the strengths and knowledge of our representatives and the expertise that went into creating our material and crystallising our message to the community, some of our success was undoubtedly down to the well-organized delivery of our leaflets and newspapers on a consistent basis.”

Would you recommend DOR-2-DOR and/or use our service again?
“Yes, we have found DOR-2-DOR to be very supportive and helpful in planning and scheduling the delivery of our material.”

Below is a section of other leaflet distribution case studies we’ve compiled for you to browse.

DOR-2-DOR operate throughout a network of franchised office around the UK. Find your local office today and they will guide you through the next steps.

We operate the largest network of local franchised offices across the UK, helping businesses and individuals to market their products and services using our services.

Coronavirus: The Value of Door Drops During Lockdown

How to Get More Customers

Worried Your Leaflets Go Straight in The Bin? 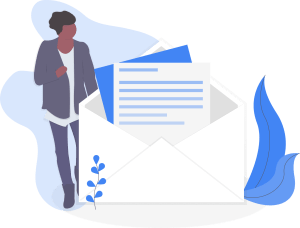